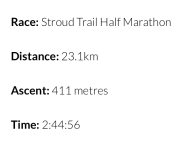 It had been an unusual week. It’s not often you wake up not knowing that you’d be going to sleep in a different country. Family comes first, and sometimes that means forgetting your own plans and hopping on a flight last minute. Within the space of half an hour, I’d booked my flight, unearthed my passport, and chucked goodness-knows-what into a bag, then jumped in my car and headed to Gatwick (side note, did you know A21 train Gatwick airport staff in how to identify potential victims of trafficking?).

So I hadn’t thought I’d be back in time to do my next challenge race, the Stroud Trail Half Marathon (don’t believe the name, it was 2kms further than a half, and my longest run to date!) And then when a couple of days later in the week I unexplainably passed out, giving myself a lot of bruises including a gangsta black eye (you should see the other guy!), and hadn’t been feeling too well, I’d decided that even if I was back home in time, I probably should be sensible and not run.

But runners are a strange breed. “Sensible” is open to interpretation. Perhaps I can just go to the race base and support the other club members running, I thought to myself. Sure, I’m a bit wobbly, and with flying in yesterday and the stress of the week haven’t had much sleep. But I guess I could just start running, and see how I feel, no harm in that? Yeah, right!

For the first, oh, say, two thirds of the race, I kept thinking to myself, I really need to drop out before I pass out. Blurred vision, swaying all over the place, I possibly couldn’t have told you my name – it was like a drunken walk home after a big night out!

That’s not to say I’m particularly “exceptional” for running – it was foolishness that started me running the race, and stubbornness that kept me running. Foolishness and stubbornness when it comes to running when perhaps you shouldn’t are qualities that seem to abound in runners – ain’t nothing gonna stop us! But as I put one foot in front of the other, I kept talking to myself and giving myself little goals: “Just reach the tree and then you can stop”, “Just do 5k, that’s a parkrun, you can manage that” “Well, you’re a quarter of the way through, you may as well keep going for now and see what happens”, “this bit’s downhill, you LOVE downhill”, etc.! 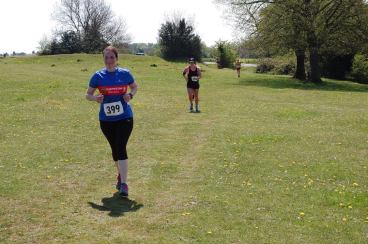 I survived, and I finished my race, and it was the toughest yet, not only because of how I felt physically (FYI I wasn’t sick like at Cardiff – Cardiff was much tougher from that perspective! I think, post-race analysis, I was just slightly exhausted, and my main concern wasn’t about feeling ill, it was that I’d fall over or faint and injure myself!), but also because it was seriously HOT! (well, for the UK anyway! Someone said 28’c?!), and my furthest distance, and the terrain was hilly and off-road, which takes a bit more energy and power than road runs.

Starting in the historic Stroud market town centre, the race headed towards the canal path where it followed along for some time. We then went through a few treeless fields, the sun relentlessly beating down. Following parts of the Cotswold Way, the race continued through wooded sections and across the common. The race finished in the market square where it started, and I was so relieved to cross that finish line!

I’m running 30 races for 30 years, raising money for A21 and awareness about sex trafficking. Please consider supporting me – my friend’s company are doubling all donations up to £500!

Up down all around (race 7)