That first “proper” run in the woods will stay etched in my mind forever. It was the pivotal moment when running changed for me. With no time constraints and no predetermined idea of where or how far I was going, I became Forrest Gump in Wentwood Forest, and just kept running. For the first time running wasn’t a chore,  a workout to complete, a distance to be met, but I was gladly moving over the trails, exploring the secret world around me with wide-eyed wonder. A deer skipped through the trees as squirrels hastened to climb them, the sky beamed sunrays before an unexpected sprinkling of snow started to fall and cover the ground. I was seeing the world in a new way and I felt unstoppable.

So, despite there being several tempting race options on the same day clamouring for attention, I knew I had to run Wentwood Woodlark. This was my backyard, my playground, the place where I fell in love with running.

I love participating in Harriers races. There’s something really homely about running in an event hosted by your friends and fellow club runners which removes any pre-race nerves. And this was on my turf! Although I couldn’t quite work out the route (me and maps don’t mix well), I knew it went over Gray Hill and that I’d undoubtedly be familiar with much of the course.

Lining up, having set up my display of on-brand Harriers cupcakes for post-race refuelling (thanks Lisa for helping me to assemble the surprisingly challenging cupcake stand), I felt pretty relaxed, and was looking forward to the run. Chatting with other Harriers, the siren that signalled our start was almost a rude interruption to our socialising! We shuffled forwards and began on the short downward country lane spiral, before we turned onto the trail.

Downhills are my favourite, and where I possibly have a small advantage over fellow runners of similar pace, if only for my recklessness – I’m not afraid to fall! But the path was a little too narrow, and I didn’t want to take others down with me! I also sometimes feel pretty stupid bombing down the first downhills only to be very quickly overtaken on the uphills, as I’m sure the other runners wonder what I was thinking, or that I set off too fast and couldn’t sustain it!

Reaching the first hills here were no exception. I’d been warned, but had been a bit blasé in my thinking towards it, “oh sure, there’ll be a hill or two, but I don’t find them as difficult as I used to, I’ll power through with the help of my mantras”. But no, those first hills were tough and I became acutely aware that my legs were in actual fact made out of concrete. I’ve had “heavy leg” before if I’ve overtrained or not allowed much recovery, but I hadn’t anticipated it for this race; I’d taken it relatively easy the week before.

I wondered if I’d yet again made the mistake of starting too fast, and so even this early in was already paying the price and I nearly checked out. Thinking I’d already knackered my legs, was there any point in trying? But I reminded myself of what someone had said about not worrying about the challenges ahead or how far you have to go, but just live in the moment, and push as hard as you can for the kilometre you’re in right now.

As we climbed up through a field, I recognised the memorial stone in the wall that the runners were streaming to. On training runs I’d often reach this wall from the other side, and stopped to admire the stunning view of the Severn Bridges spanning the river in the distance behind the fields, perfectly framed by the trees. But I’d never ventured beyond the wall for the uncertainty of where it led, knowing it’d be a steep climb back up if I found myself pathless.

I made a mental note to explore further sometime, and as I jumped over the stone wall, the game changed. I was now on familiar ground. And the fun began, ducking trees, hopping over rocks and skipping through puddles. This is what you trained for, I reminded myself. This is your home field advantage; these are your hills and this is your forest. Ignoring the slightly moany voice in the back of my head which retaliated that in training runs I could stop to take pics and enjoy the view (aka catch my breath) anytime I wanted, I gritted my teeth and ran on.

The gentle climb towards the top of Gray Hill opened out onto the common, where I spotted Tosh ahead armed with his camera, so it was thumbs up and cheesy grin on (a trend started by our chairmain which has become our clubs signature pose!). Then even more fun: a short sharp steep descent, and with no one immediately ahead of me to risk bowling over, I stormed down, pretending I was flying. Halfway down was girl delicately making her way down. Hearing my thundering descent and perhaps fearing for her safety she shouted that she was a little nervous on descents and stepped aside for me to pass. Smart move, Pegasus!

It was great to see more Harrier marshalls along the way as Helen cheered me on at the base (politely not pointing out how my top was flying up, showing my belly bouncing with every step), and then further along the track Suzie yelled encouragements, remarking “I’d recognise those leggings anywhere!” 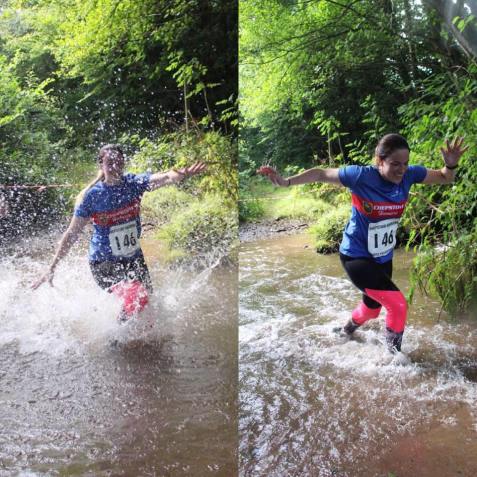 Towards the end I came to a stream crossing at the same time as another runner, and knowing again that my lack of fear (or lack of decency in not caring about splashing him) I went in full force. And it was fairly shallow….until suddenly it wasn’t! Plummeting to waist deep, I laughed at my own naivety, while Paul was happily snapping away on the camera. “Oh, I missed it!” he laughed. The fellow racer replied that we’d better go back and do it again!

Hitting more hills as we made our way back up to Earlswood, I wondered how much cake would be left. Ascending a steep and slippery field, I imagined I was on one of those stepping machines at the gym and managed slightly more than a walk but much less than a run. Finishing straight and I put my last effort in as I crossed the line. It was lovely to see some harriers who’d finished before me at the finish line, and we chatted about the race and how we’d got on as we headed back towards the village hall. I’d do it all again, right now, I thought to myself. I love running!

Often when I run in the woods by my house, I think of a young woman whose name I don’t know. Her body had been found in a similar area of woodlands. Pieces of burned wood next to her body told her story of her desperately trying to stay warm against harsh winter conditions. These woods were a common trafficking route along the Greek-Bulgarian border, where I completed the A21 Muskathlon half marathon earlier in the year. This woman had been dropped off by her traffickers on one side of the border, but her buyers hadn’t come to pick her up, and she had frozen to death. Her grave lies in a little village close by, where the community who discovered her had buried her, marked by a little cross with the inscription, “unnamed”.

The lives of sex trafficking victims are often treated as commodities, as nothing more than “things” to be bought and sold, and sold again and again for sex. Kevin Bales, anti-trafficking advocate, uses the term “disposable people”, as the organised criminal networks often responsible for trafficking women into the sex trade dehumanise their victims. Did the life of this young woman, freezing to death in the woods, matter to those who had forced or coerced her into the sex trade? Possibly not – although I can’t say for sure, I’d imagine their only disappointment would be loss of income of another body to be sold.

That’s why I run for A21. Their rehabilitation shelter in Greece assists young women who have been trafficked, by providing a safe space to recover, with access to professional health and psychological care, as well as access to education and learning life skills, so they can rebuild their lives and safely reintegrate into society. They have other shelters around the globe, as well as several offices, which work on prevention, awareness, training and prosecution. If you’d like to support my challenge and donate to the work of A21, please click here.

In case you’ve missed any, here’s a list of my races so far that make up my 30 races for 30 years challenge: